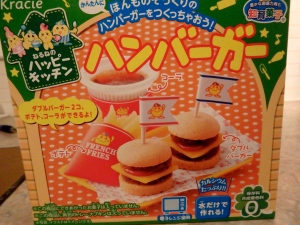 When I was shopping with a couple of girlfriends last weekend we stopped in a store that does imported snack foods and this mini hamburger set was there. It’s a Japanese product and basically there’s a whole lot of powders and trays and you mix stuff together, microwave it and Bob’s your uncle, you have a mini hamburger, fries and drink!

Below are the steps that show how it all goes together. First of course you have to take everything out of the box, which comes neatly wrapped in another packet, but be careful when removing this as you need it to make up things like the tray, fries packet and cheese template.

And below is all the stuff contained in that inner packet… 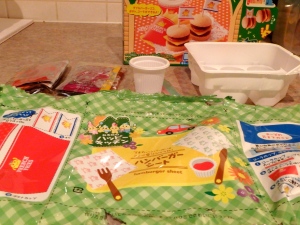 Then… let’s go and cut everything up ready to start making the burger meal.

First bit to actually cook is the fries. This is in the yellow packet, which you empty into the triangle shaped tray with the ribs in the bottom of it. There is a little “cup” for lack of a better word, and you put two of these cups of water in, stir it all together and then press it down to the bottom of the tray. You might need to get in there with your fingers to squish it down.

Next we move on to the burger part, this is the brown packet. It’s emptied into the square dish and then, the instructions I had said add one cup of water, but I had to add two to get it to stick together properly so maybe start with one and see how you go. This then gets squished into the middle tub of the three tub tray.

Then we put the buns together which is the orange packet. This also gets mixed in the square tray – you might find you need to clean the trays and the spoon in between mixes. With this bun powder you add 2 cups of water, stir it and then you spoon one half into each of the round tubs to the side of the burger. The mixture should only come up to about where the line is half way up the bun tubs.

When it comes out of the microwave you cut the buns in half, and then you’re supposed to cut the burger into 4 patties so that the burgers end up like a double burger bun, but it’s too tiny to do that, so I just left it at 2 patties.

Next bit to make up is the cheese which is in the blue packet. This goes in either the corner or the square tray it doesn’t matter. Add one cup of water to the cheese powder and mix it together. Then you grab the part of the packet that had the blue rectangle on it and try to press the cheese out to match the dimensions of the blue rectangle. Obviously my squashing ability isn’t that great so my cheese doesn’t look perfect! 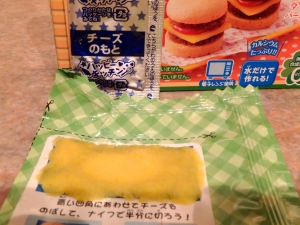 You then cut this rectangle in half to make two square slices of cheese and these get popped on top of the burger patties.

So the next part was going to be the ketchup to finish off the burgers but I opened the wrong bloody packet and didn’t realise until I’d added water, so I ended up making the cola first. You take the little cup and fill it till the water is about 1cm from the top and then add the cola which is the pink packet. It will fizz and bubble for a few seconds, then just give it a quick stir and it’ll be all good.

Ok so then I did the ketchup which is in the red packet. This can be mixed in either the triangle or the square dish, either is fine, and then just add two cups of water to it and stir. It makes heaps of ketchup so there’ll be plenty for the burgers and left over if you wanted some for dipping the fries in. 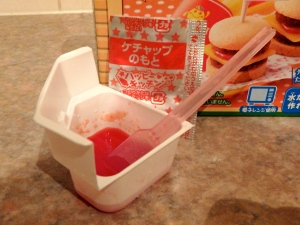 The ketchup then gets spread over top of the cheese on the burgers, or I suppose you could put it on the bun, whatever your preference is. 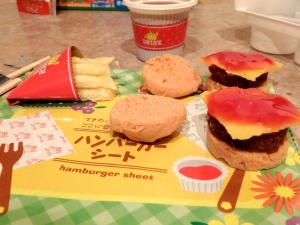 Then it’s just a matter of finishing the burger assembly and stabbing them with the little toothpicks and voila there’s your meal! I included an Australian 50 cent piece in the picture below so you can get an idea of just how small this snack/meal is. It’s pretty darn tiny that’s for sure. 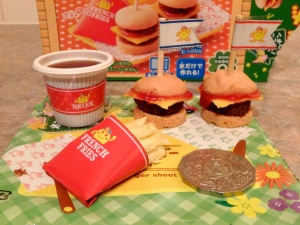 Did I eat it? I did. I tried not to think about what I was putting in to my body with eating it, but I was pretty curious about how it would actually taste. It wasn’t that great, flavour or consistency wise but it was still a fun little exercise.

There are a few other snacks like this that Kracie do, like donuts and sushi and stuff. This was quite entertaining so I might get those at some point and see what they’re like.

Have you tried any of these before? What did you think of them?