I can’t believe another week has gone by already. It doesn’t seem like it has been long enough for it to be yet another Friday, and it doesn’t really feel like I’ve achieved much over the last week either!

Pole class. Second to last class for the term and even though I was feeling like crap I still got my butt into gear and went there anyway, go me!

Nutrimetics Beauty Club. I had training on Monday night and we did a couple of things, first looked at how to build the business through party bookings. Then second I got to play with the new Professional Colour Illusion Eyeshadows which was great, they are so nice and soft and creamy to use.

Aquapole. Yes another class again this week, I’m really enjoying seeing my girls each week and hoping to book something else in after this so we can keep catching up!

Bellabox. My June bellabox arrived this week as well which is exciting. There was so much in it the box was literally bursting. Can’t wait to get into it and try everything out.

I hope you have had a great week this week. I’d love if you could share the highlights from your week in the comments.

We’ve hit that special cross over point in the month where the July brochure has just been released meaning you are able to purchase products from both the June and July brochures.

The brochures can be viewed online and are fully interactive so you can make your purchases directly from the magazines. I am an Australian based Consultant, so no matter where you are in Australia you will be able to purchase any Nutrimetics products from my site.

The July Nutrimetics brochure sees the release of the new Nutrimetics Professional Colour Illusion Eye Shadow. I got to try this out at a company event earlier this week and these colours are a cream based eye shadow with a bit of glitter and a lot of stick. In the July catalogue you’ll find a lot of deals around these eye shadows in combination with the Nutrimetics eye primer as well.

You are also able to get free shipping on any orders over $55 if you place your order before 6am AEST this Saturday.

I’m so excited, my kit arrived today! Can you believe I got everything in the picture for only $1 upfront?

I did the math and everything you see in the picture would normally be over $400, I feel so spoilt!

If you’re interested in finding out how you can get your own kit, just let me know.

Here’s what’s in my kit:

Please check out my Nutrimetics website if you’re interested in seeing what other products are available for purchase.

So I decided to take the plunge and I signed up as a Nutrimetics Consultant last week. I love makeup and skin scare and all things beauty and have been curious about it for a while but also a little afraid. What if I fail? What if I start doing this, friends and family see it and then it all falls in a heap and I’m not successful? It makes me really anxious thinking about it to be honest.

I’ve been writing notes and strategies around how I can run this business online, I’ll probably need to do a couple of parties to rack up some sales and get interest. Though to be honest that also freaks me out, I’m quite shy and the idea of being in front of a whole group of strangers frightens me. But who knows, maybe I’ll end up enjoying it.

So many unknowns, but I’m still quite excited about at least being brave enough to give it a go.

It has been a pretty busy week, things are really picking up at work, I’ve had a few work lunches on as well, so there’s lots been happening for me. Oh, and we had a sudden, fleeting storm this afternoon that was quite powerful and the office windows leaked!

Monarto Zoo. I feel like this has been a highlight pretty regularly lately, but I went up last Saturday with a couple of girlfriends because I still had that free entry pass from work, but also have a membership so they shared the free entry pass. It was such a beautiful day, and it was so good seeing everything, especially the giraffes!

Catch up with friends. On Sunday afternoon my partner and I headed over to a friends place and caught up with them and their kids. It was a nice afternoon so my girlfriend and I jumped in the pool and played with the kids.

Lunches! On Wednesday and Thursday I went out to lunch with some work mates I haven’t been able to catch up with for a while which was nice.

Makeup party. I love makeup and one of the ladies I used to work with has decided to become a sales rep for a brand called Younique, so I headed over to her place on Thursday night for a catch up and to check out the makeup as well. Catching up was great and a lot of the makeup was also really amazing.

Early Australia Day. Australia Day isn’t until next Tuesday, but at the office rethought it’d be nice to have a BBQ while we had everyone together which was nice. 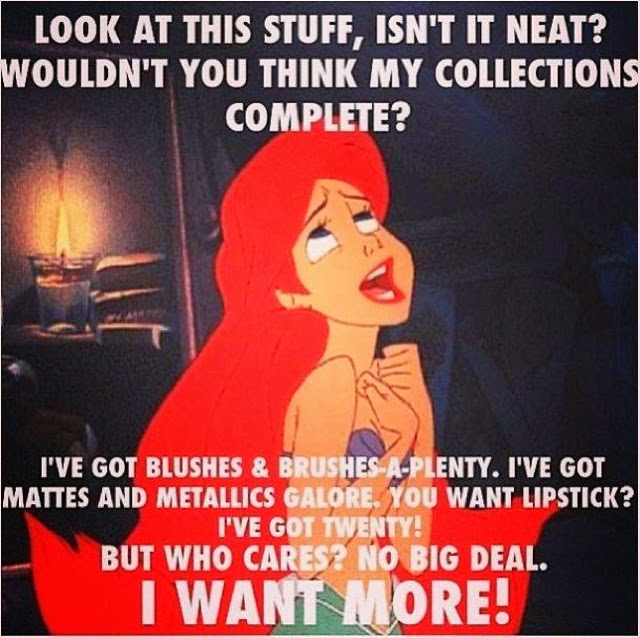 Ok so I got a voucher for Mecca for my birthday so yes, I went on a shopping spree! I love makeup, I try not to buy heaps but I just can’t help it, I love the prettiness of it and all the different looks you can create with it.

On a whim, just out of curiosity I thought I’d see how different makeup looked in the year I was born (hint: 1985) to how it looks now. Some of doesn’t look so different, it still looks scary in some instances let me tell you!

The couple of images below are the least scary makeup looks.

It’s the eyes that have changed a lot I think. A lot of the every day looks I see don’t have too much going on around the eyes, it’s more natural, and then combined with a bright beautiful lip colour. Those times when the eyes do have a full on look happening it is usually paired these days with a light or nude coloured lip.